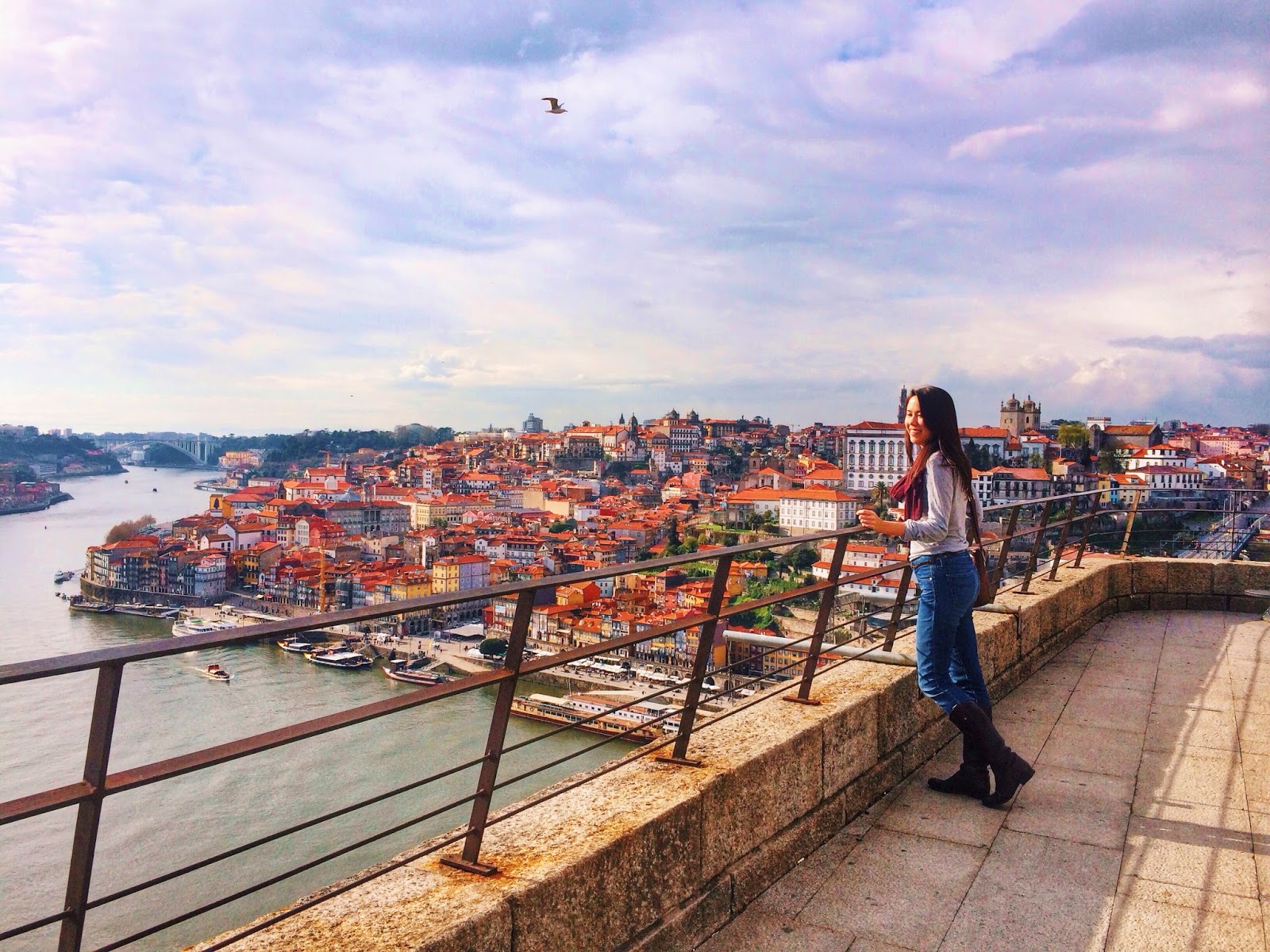 Northern Portugal is often overlooked by tourists who favor the capital city of Lisbon in the south, or Portugal's neighboring country & my current homeland, Spain. To be honest, Portugal was never really on my radar of places I really wanted to visit during my time living abroad in Spain. But if there is one thing I've learned while living in Europe, it's that sometimes the most unexpected cities and countries are the most beautiful. We all know that Paris, London, and Barcelona are incredible, but some of my fondest traveling memories are from my trips to Prague, Salamanca, and Granada. It's always nice to get off of the beaten tourist track and get swept away by the beauty of a new language, cuisine, and culture. 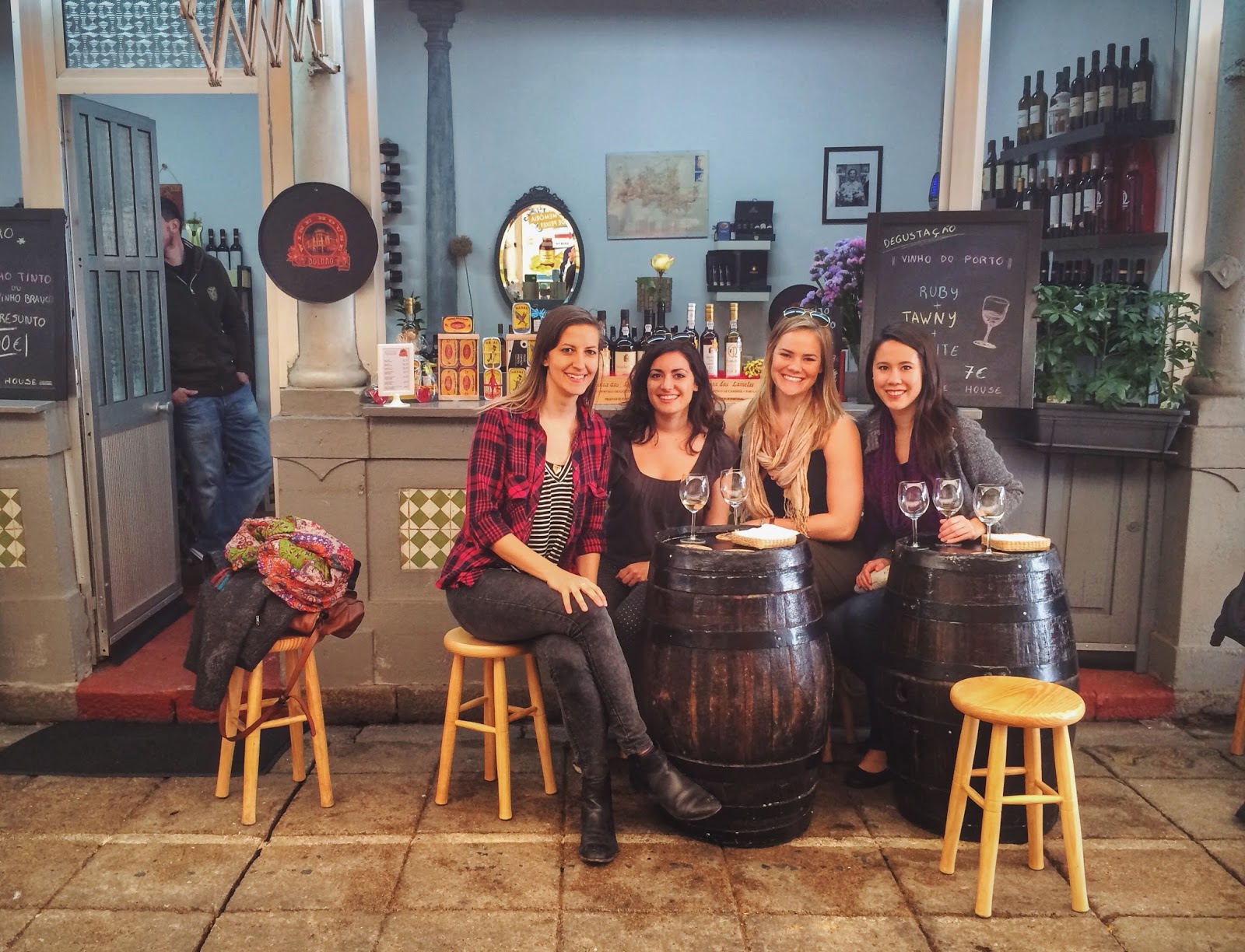 {vino break at Bolhao Wine House in the Bolhao Market}

I ended up in Porto with three of my girlfriends because we discovered a 60 euro round-trip RyanAir flight from Madrid - way too good of a deal to pass up for a quick and easy weekend trip! We only spent one hour in the air before we were deplaning on the Porto airport's tarmac. Before leaving for our trip, the four of us girls got together for coffee and to discuss our travel personalities, as we had never traveled together before. We quickly came to realize that we were going to be a group created by the travel gods, seeing as we all had three very important goals for the trip in common: we wanted to wander around aimlessly and take a million pictures, stop often for food & wine breaks, and not enter a single museum. Bingo! I think we were meant to be travel companions.

Sights & Activities: This section will be pretty scarce this time since a very large portion of our time in Porto was spent wandering around the city center, stopping only to try a new Portuguese treat, or drink another glass of port or vinho verde. However, we did see a few things that I definitely recommend for anyone venturing into Porto. The Sao Bento train station is listed as one of the most beautiful train stations in the world by Travel & Leisure, and for good reason. While this isn't the oldest train station in Europe (it was only opened in 1916), the beauty lies in all of the intricately painted tiles that depict the history of Portugal. It is still very much so a functioning train station, so entry to see the tiles in the front room is free! You know how much I love free. ;) 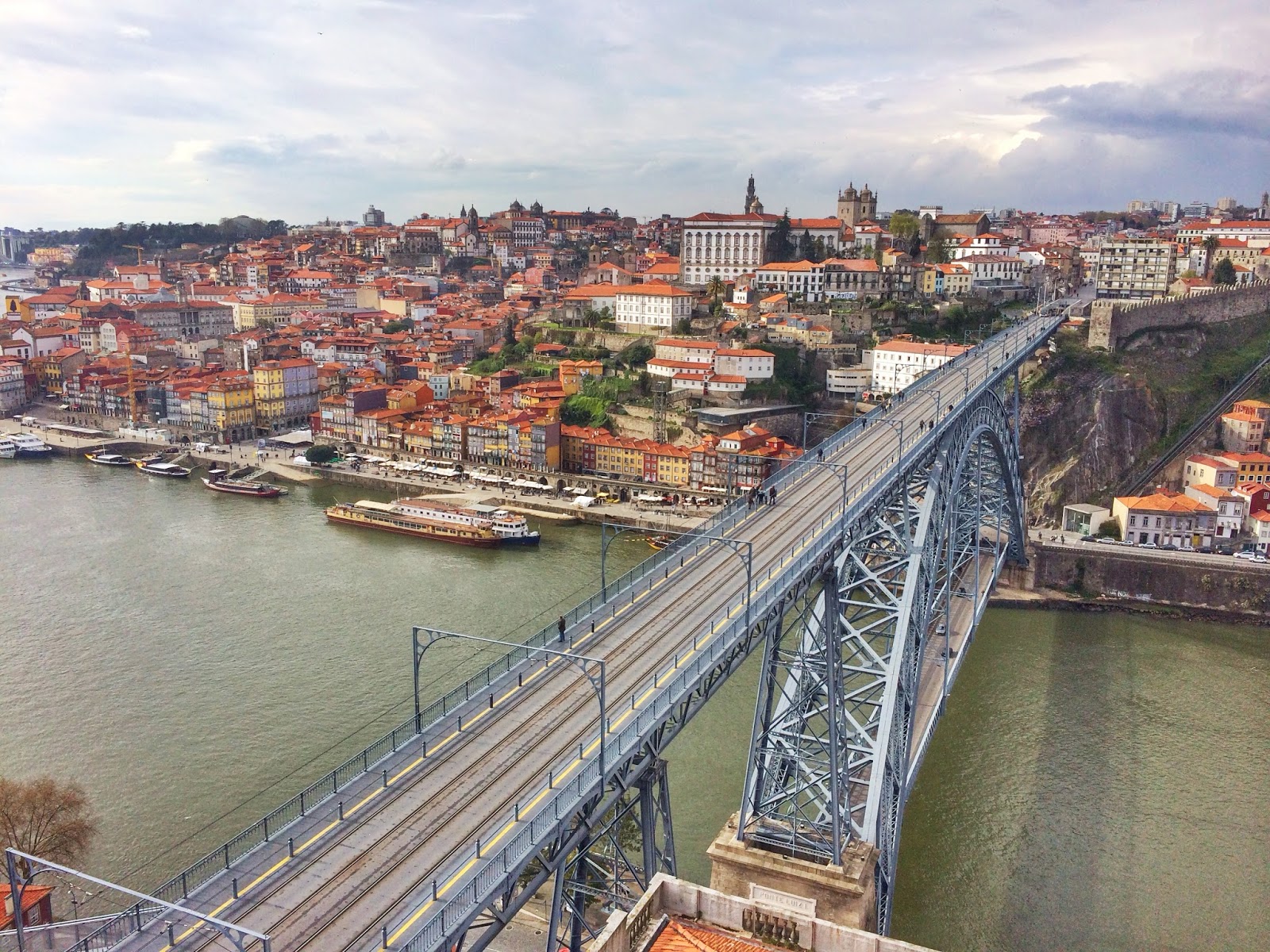 Does the ironwork of this bridge look familiar to you? If you thought to yourself for a second that it looks similar to the Eiffel Tower...... props! This bridge was engineered by Theophile Seyrig who assisted Gustave Eiffel in designing and engineering one of the most famous landmarks in the world. It is a two-tier bridge, with car traffic and a pedestrian walkway on the bottom lane, and a metro line and pedestrian walkway on the top. It is a really cool experience to walk on both levels! Either way, you get a view of one of the UNESCO World Heritage sites -- the Ribeira District. It's stunning. 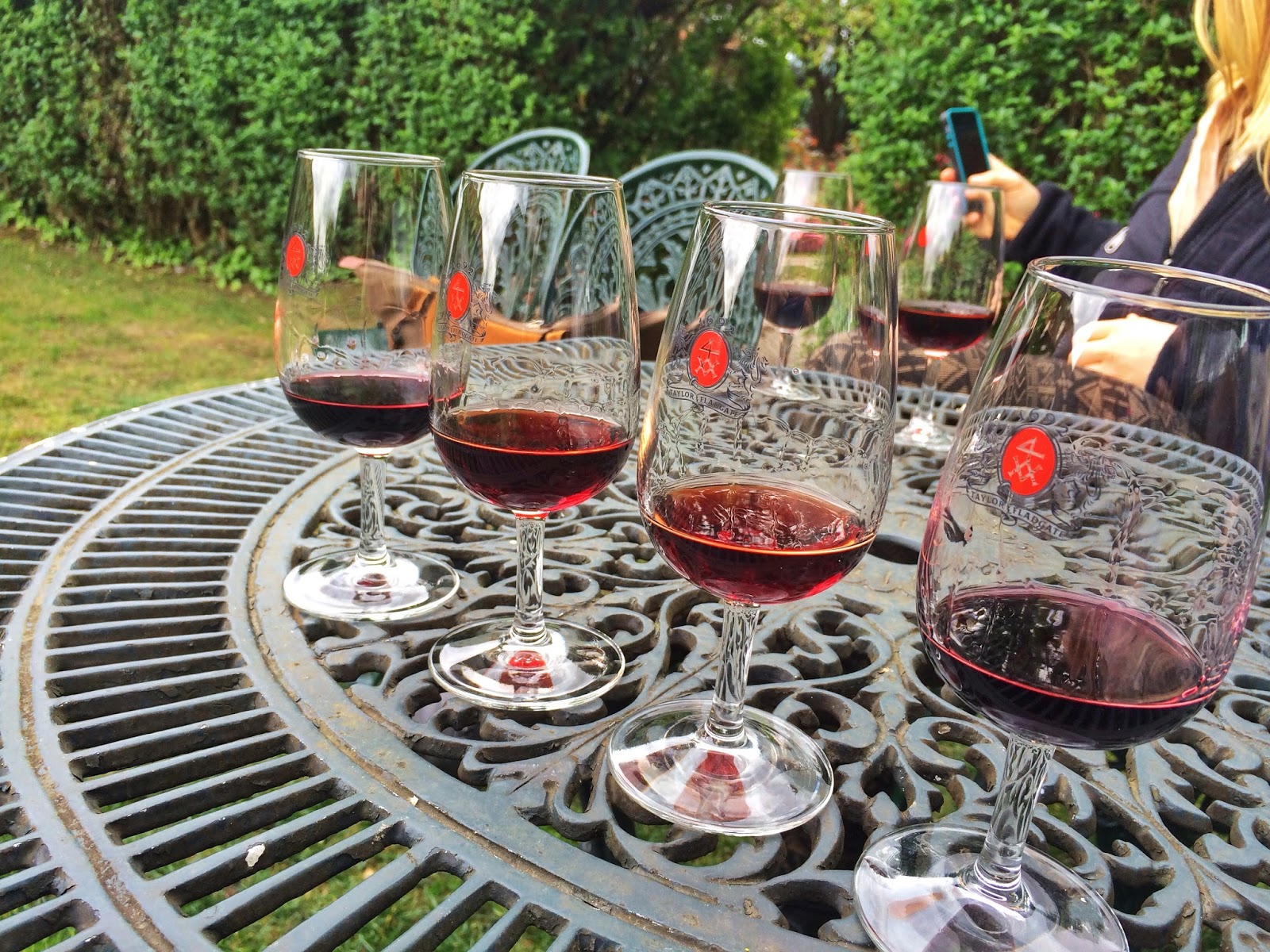 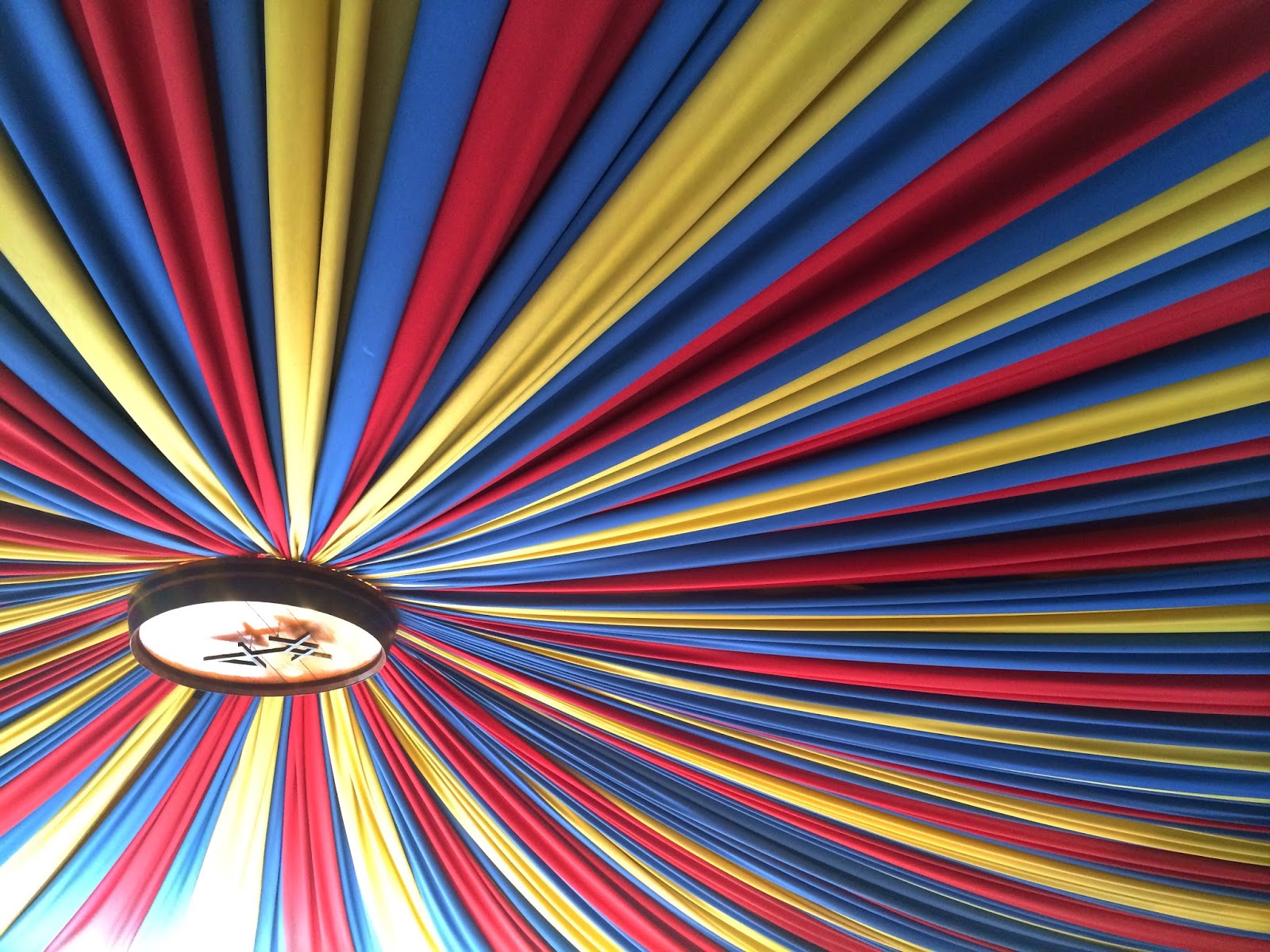 One of the top things to do in Porto is to (duh) go to a port tasting at one of the port houses across the river from the Ribeira neighborhood. The oldest and most established port houses are located higher up the hill in the Gaia neighborhood due to fear of flooding from the river back in the day. We went to Tayor's, one of the oldest port companies. The same family has been making port there since 1692! Tasting port in Porto is extremely affordable and a really fun time - we only paid 5 euros for a tour of the grounds and 3 port samples. Fun fact: Port wine cannot be called port unless it comes from the Douro Valley in the northern provinces of Portugal. Don't be fooled by imposters! Although I wasn't convinced that I was going to like port before our tasting, I left Taylor's quite impressed with it. Also - there are beautiful views of the river and the Ribeira district from the port house, and there are a ton of peacocks walking around the grounds. So fun! 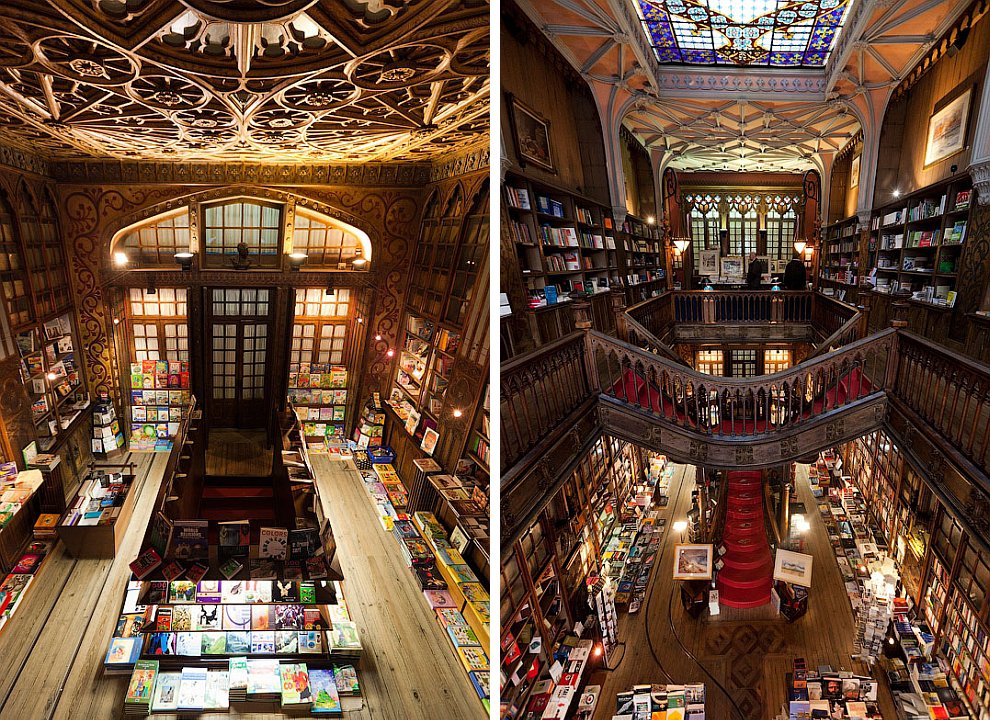 {no photos allowed inside - credit}


I wish we would have woken up early in order to visit the bookstore right after opening. It is hard for me to enjoy myself in a crowded place, so I didn't really get to fully appreciate the beauty of the intricately designed bookstore. Rumor has it that J.K. Rowling took inspiration from the architecture of this bookstore when she was coming up with Hogwarts while writing the Harry Potter series! In other fun Harry Potter facts news -- she also supposedly formed the Hogwarts uniforms based off of the uniforms of the university students in Porto.

Eats & Drinks: Remember how I said earlier that all we did was eat and drink on this trip? Yeah... you're about to see it for yourself. Before our trip I wrote down an entire list of typical Portuguese dishes with their translations. Needless to say, we made that list into a bucket list. How many dishes did we try from it? Almost all of them! 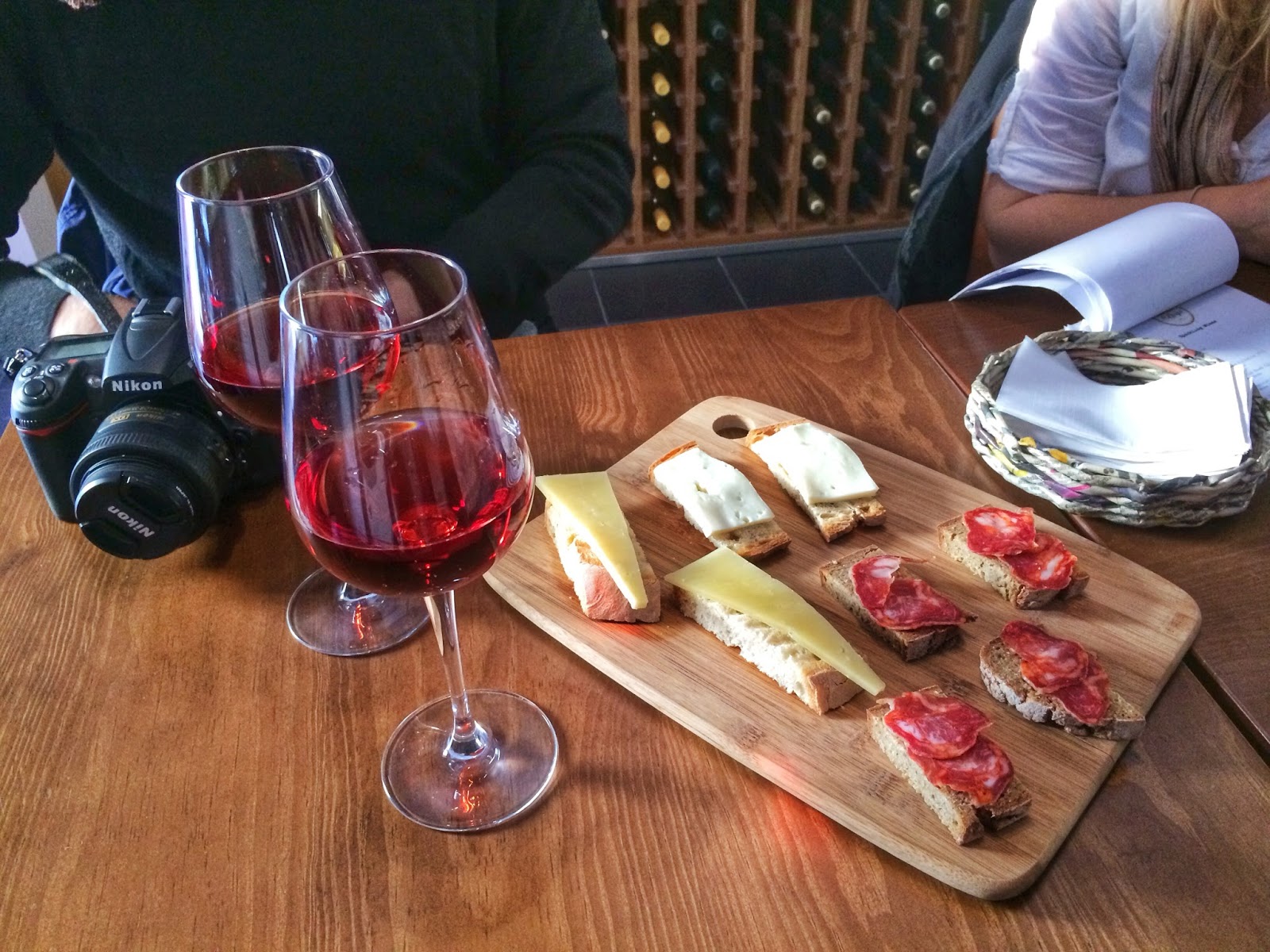 We stopped here for a quick glass of rose and some cheese while wandering around the city. We got lucky and were there during happy hour, so our little tapas were free with a glass of wine! Unfortunately, Spain hasn't gotten down with the happy hour trend yet, so it was suuuuper exciting for us. #happyhourjunkie 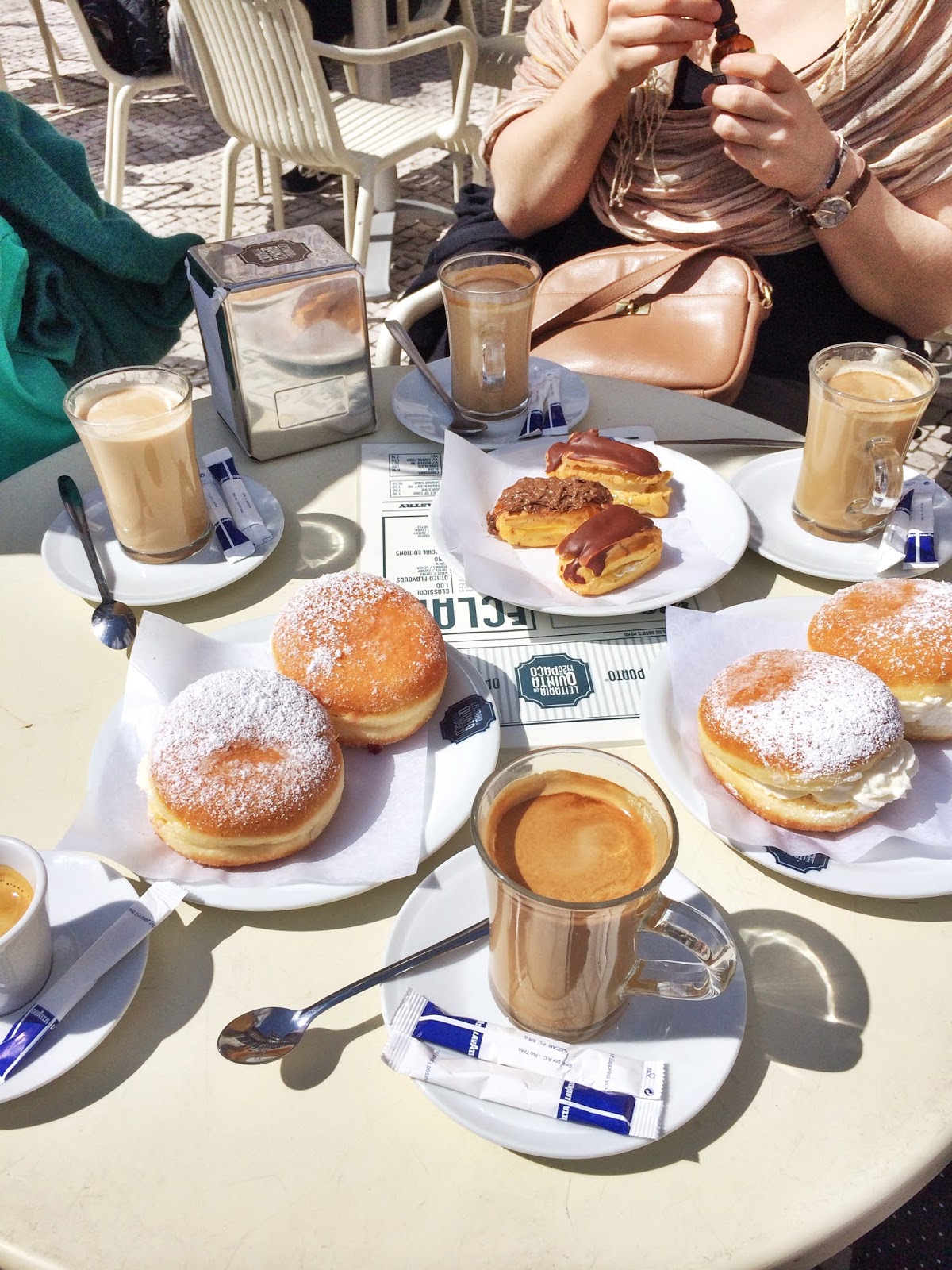 I am still literally dreaming of these 'Bolas de Berlim.' The dough tasted like a light and fluffy doughnut. It was filled with just-sweet-enough whipped cream and topped with powdered sugar. We all ate these in silence with a few "omg"s & "mmmmm"s mixed in. Leitaria da Quinta do Paco is also famous for its eclairs!

This was probably my favorite meal of the entire trip. We ended up at this restaurant after asking the owner of Bolhao Wine House for a lunch recommendation, stressing our desire to eat some traditional Portuguese food. He definitely did not lead us astray. When we walked into this restaurant it was absolutely packed with local Porto families enjoying their Saturday lunch together. We wedged ourselves into a corner at the back of the restaurant and perused the menu together. After discovering that most of the dishes on our Porto 'foodie bucket list' were sold out for the day, we decided to order what our waiter suggested. Everything was delicious, but I loved the caldo verde the most - "green soup" made with potatoes, onions, and kale. It paired perfectly with Porto's famous vinho verde, a semi-sparkling & very crisp and refreshing white wine. The picture on the left above was taken just after our lunch!

This little "snack bar" provided us with the pick-me-up we so desperately needed after walking all over the city on Friday. If you didn't know to go to this place you would definitely just walk right on by. It is a no-frills restaurant with minimal seating, but what it lacks in charm and decoration is made up for by the friendly bartenders and delicious Portuguese 'hot dogs'. As Rick Steves would say (if he actually knew about this place), "Elbow your way up to the bar, saddle up next to the locals, and order what everyone else is eating around you." But really, that's my best advice. Don't forget to wash off the cheesy cachorrinhos da Batalha with an ice-cold Super Bock. Saúde! 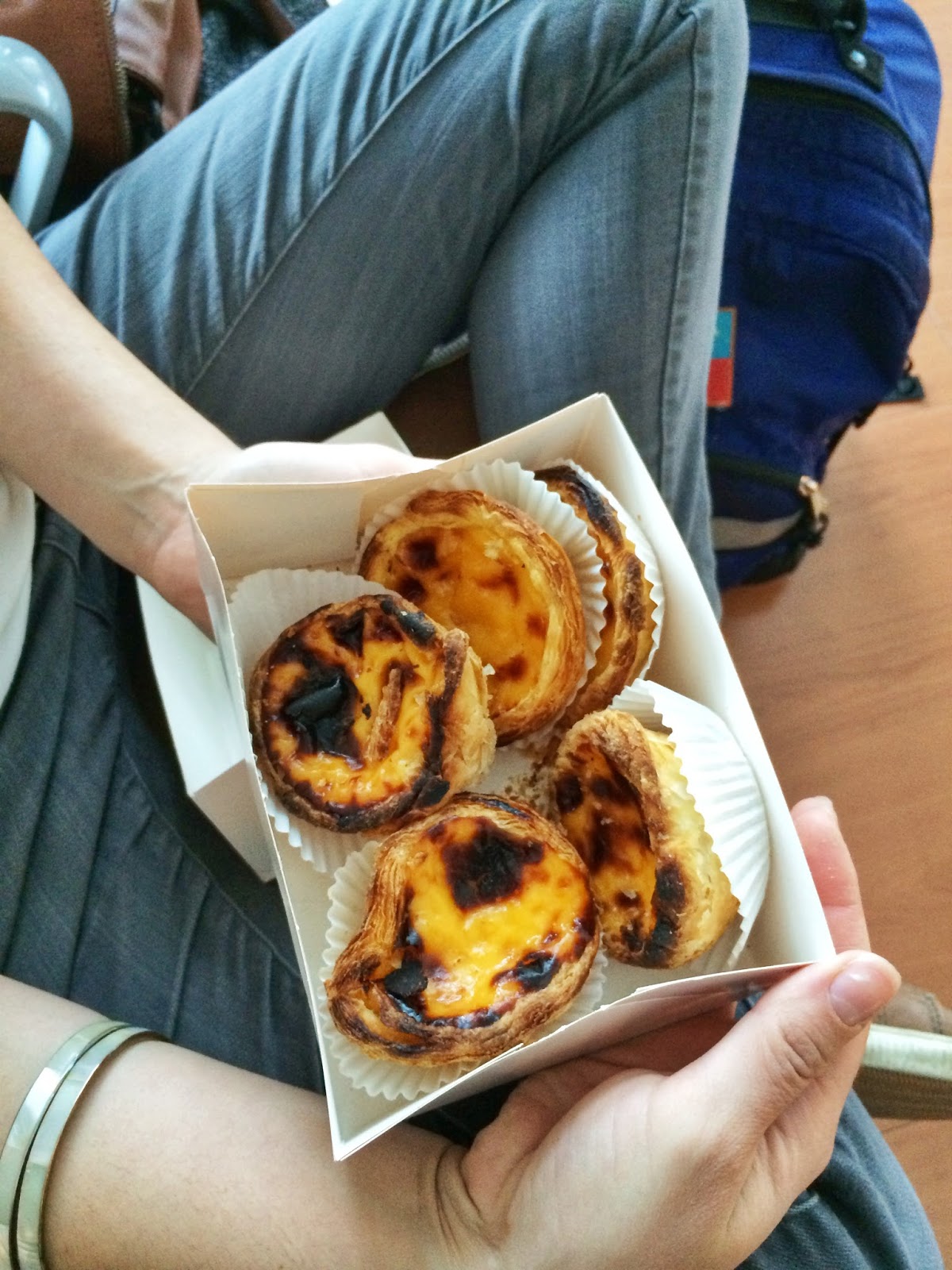 Although these tarts originally come from a little town near Lisbon, you will see these famous pastries all over Porto as well. Order one at a bar for 30 cents, or take a box to go! Recommended: Ordering a box just before leaving for the airport so that you can stuff your face with them at your gate. We did, with pride. ;) 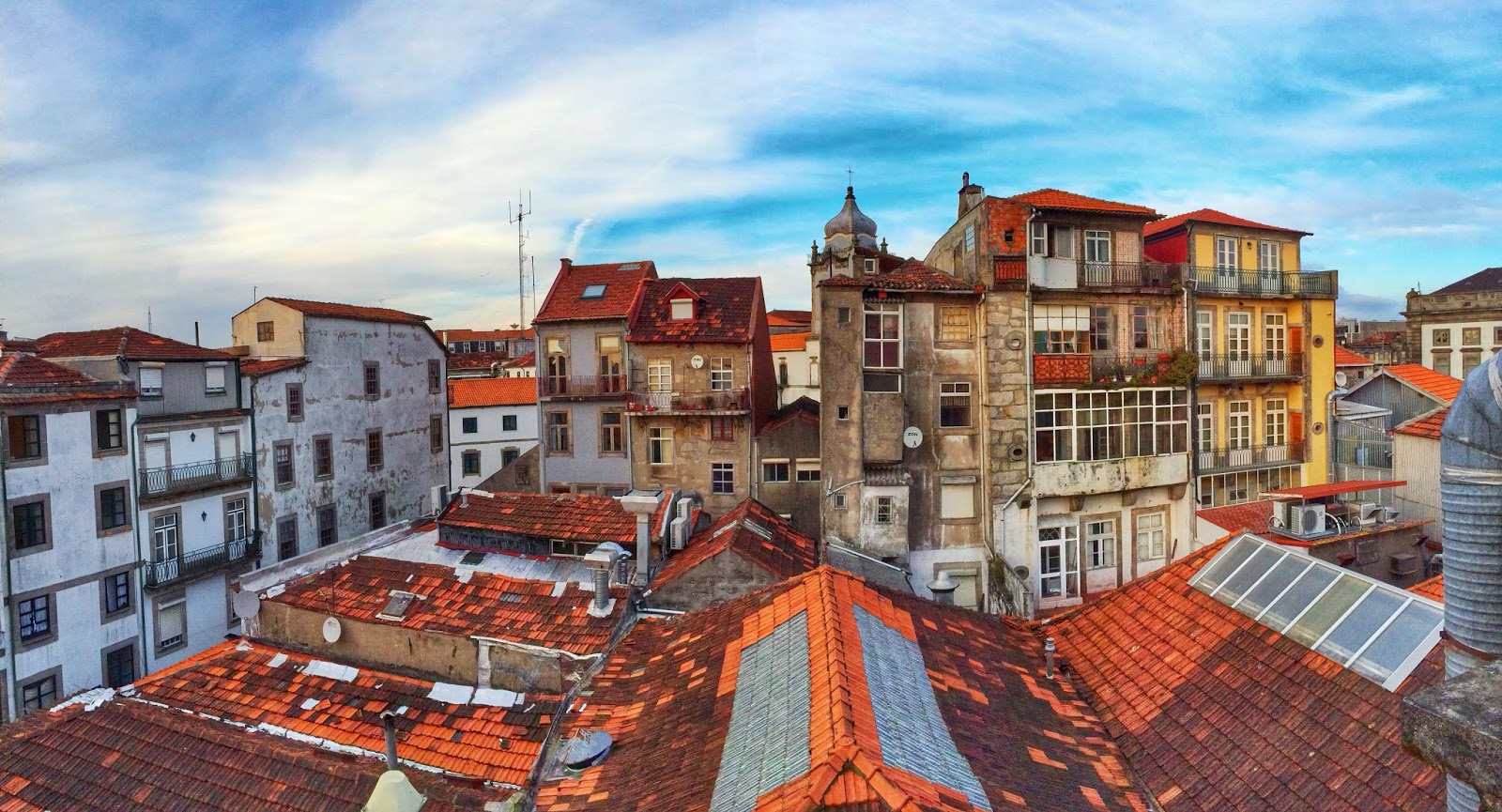 {the view from our room}

We booked a private 4-bed dorm room at the Wine Hostel. The hostel is really pretty and very central, but our room was freeeeezing cold and quite damp & the wifi connection didn't reach to the third floor. However, the staff was very friendly and helpful, and we met some new friends as well. And for only 11 euros a night, I would recommend staying here, but only during seasons with mild weather. It isn't much fun to feel like you don't want to get out of bed due to the temperature in your room! But thanks to our hostel the four of us girls met a new travel friend named Patrick. He is a Canadian who has been traveling the world for the last 6 months and keeping a blog about it. He was so much fun to wander around Porto with. You should definitely check out his blog!

Ambiance: The thing we loved the most about Porto was the rustic, real feel of the city. Although tourists certainly do visit this city often, it still feels as though it has kept its own identity away from tourism. Families still spend their weekends walking around the city together, flea markets pop-up randomly in one of the main squares, the city market is bustling and unapologetic for its wayward appearance, and the buildings look very much lived-in. You can tell that this is a city that has been through a lot, and I love it for that very reason. 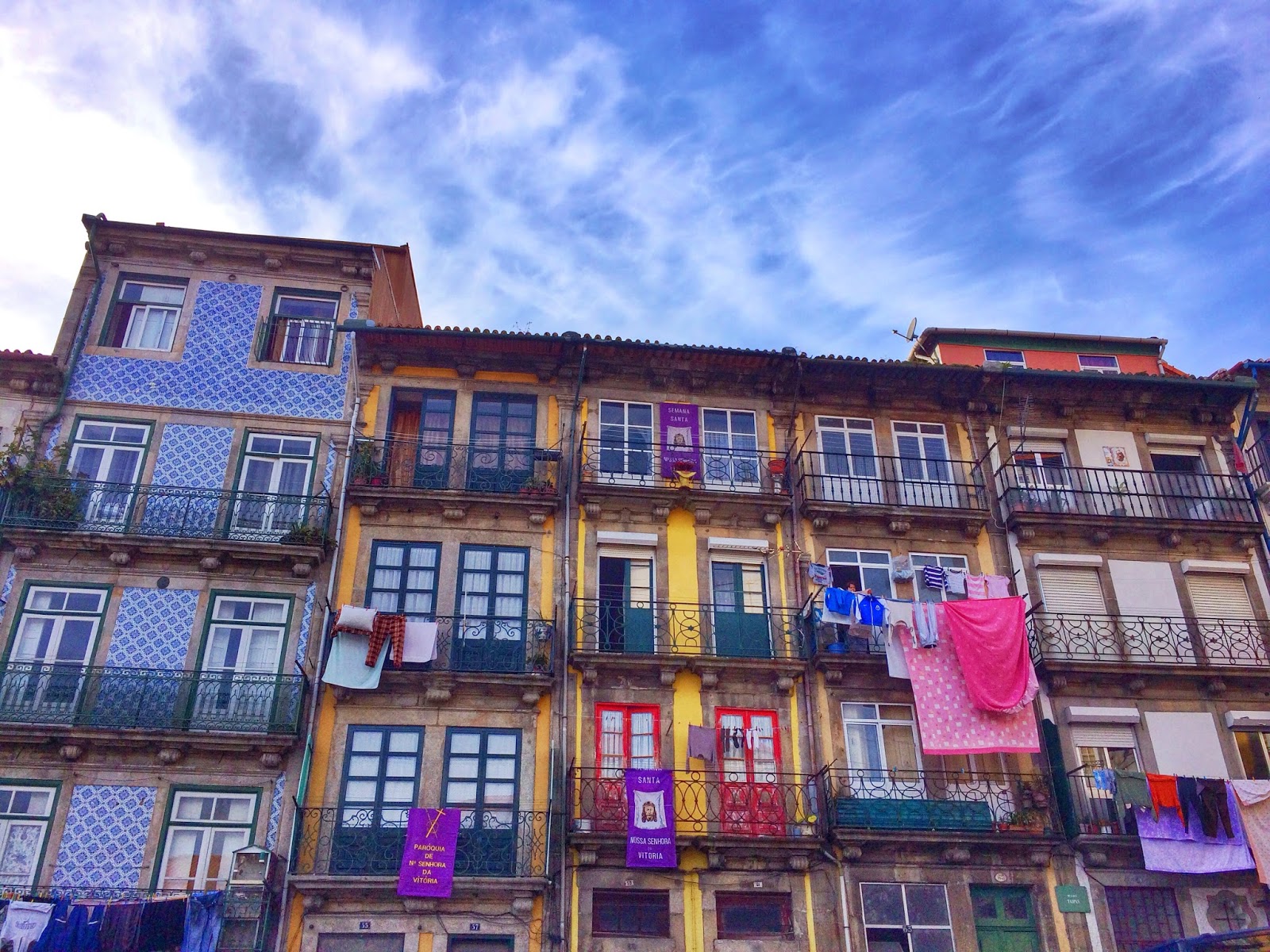 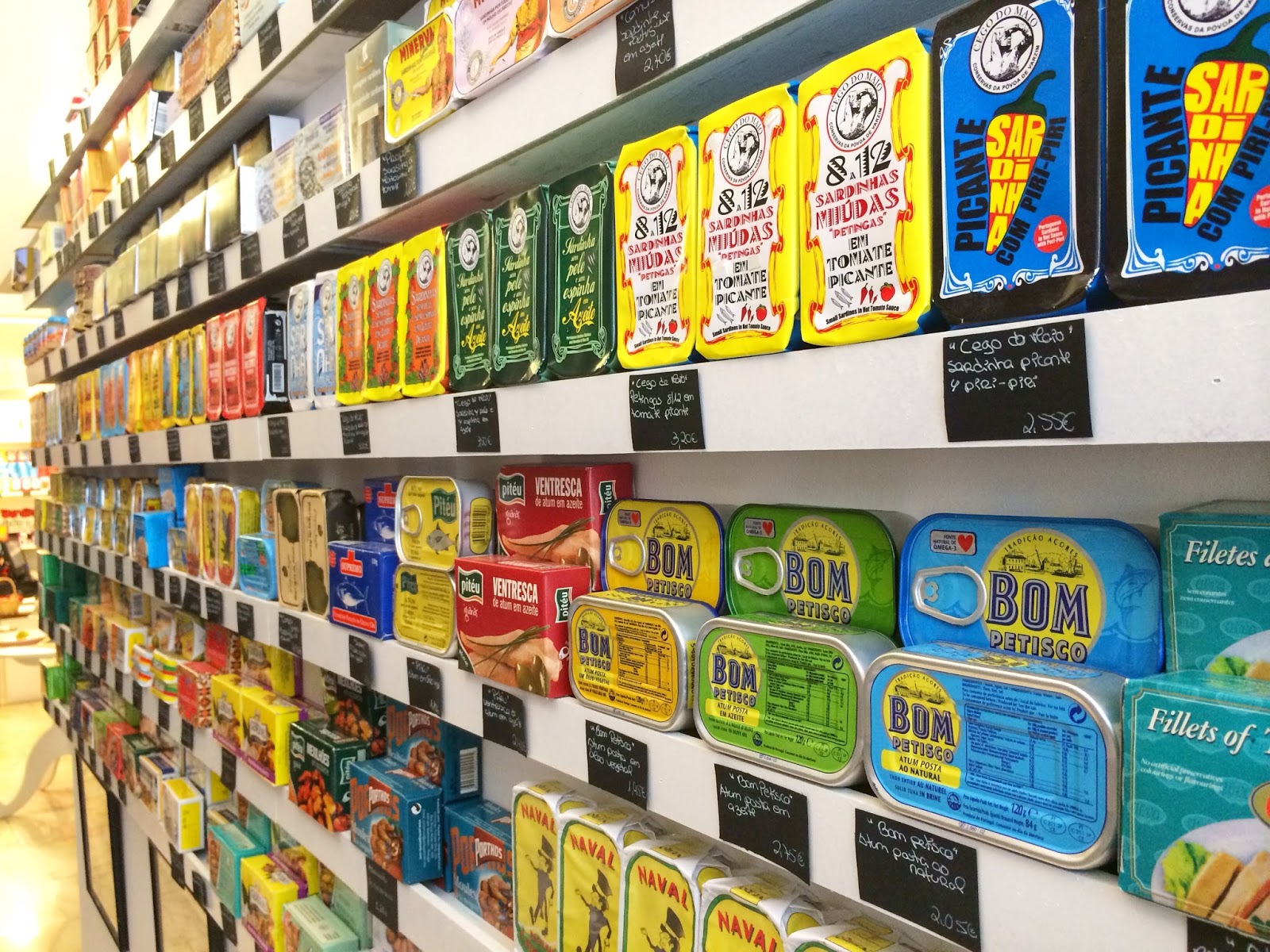 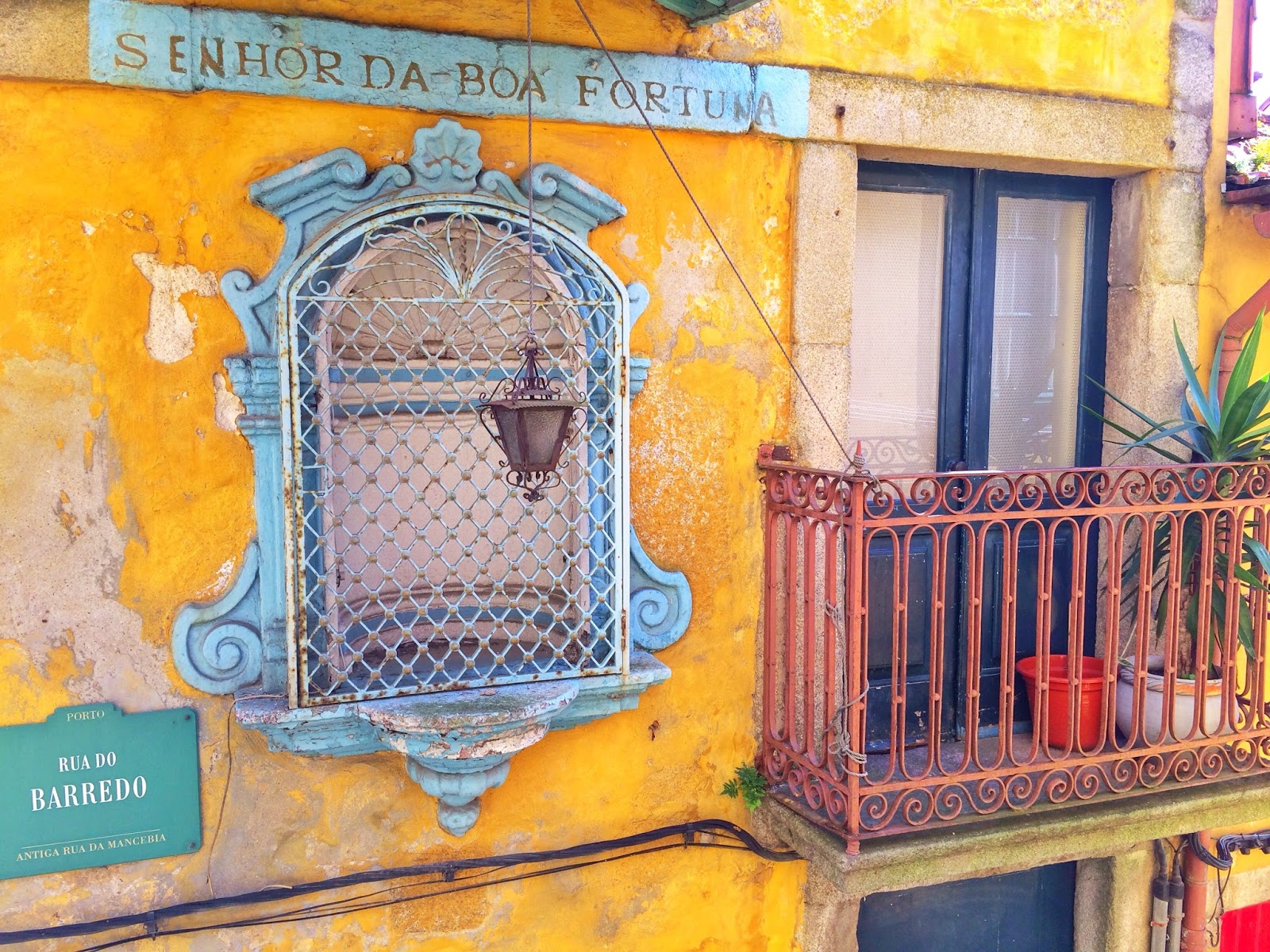 I am so glad that we found those really cheap RyanAir tickets. Portugal has it all - good food, friendly people, beautiful vistas, and a wonderful culture. I can't wait for my next trip there.

This week I'm participating in --

Thank you so much for taking the time to leave a comment! I love hearing from y'all! <3 Jen